59-563: plate from Tom Boyd (Boulder, CO); repaint by unknown. A few of these bizarre error 1932 Colorado plates were found, without paint, functioning as siding on a structure in Bailey, Colorado (Park County). Among them was this very obvious Jackson County misprint (the only such Jackson found there). It well exceeds the number of 1932 passenger registrations issued in Jackson County (in the 400s). 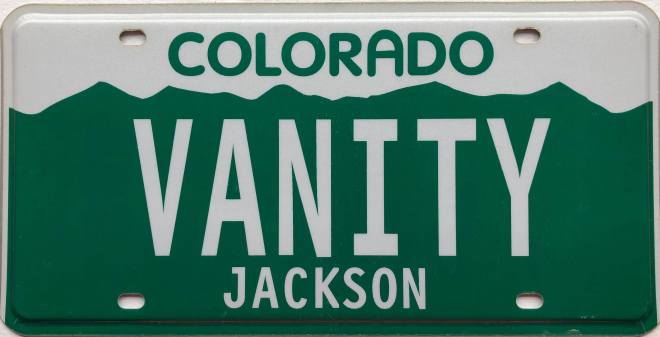 VANITY: Jim Hucks (Denver, CO). This was a sample license plate used to advertise the new flat personalized plates the state issued from 1997-2000. These were hung in the clerks’ offices in every county, and this is the very plate that was displayed in Walden!

ZJ2325: Rick Cornelison (Walden, CO). In the early 2000s, “greenies” in rougher shape were pulled off the road, but in the first few years of the new century, the state of Colorado gave motorists with these old plates the option to have them remade on the current vanity base should they wish to keep their numbers. You’ll notice that on the standard 77-00 passenger page, ZJ-2326 (green plate, one number higher) is displayed. This is the only such remade Jackson set I’ve seen in use or otherwise.