Below is the photo gallery for the years 1977 – present.

2001 – present series have been discovered using observation in Jackson County and CARFAX. Their vehicles’ title numbers (or the ones surrounding them) begin with 59. (For more information on how this is done, please consult this article.) Our full list of codes (updated frequently) can be found by clicking here.

These are plates I’ve acquired for the museum. Credit to those from whom the plates have been curated is given below each image. 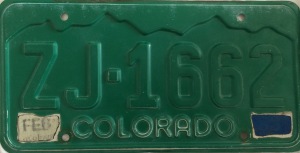